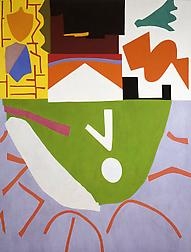 
Can the same painting give us difficulty and joie de vivre? If you have ever encountered a painting by Shirley Jaffe, you know the answer to this question. If you haven't, then you may be skeptical that such a thing is possible. You will have also, alas, missed some recent opportunities to see paintings by Jaffe in New York.

Tibor de Nagy presented a group of new paintings at the Park Avenue Armory Art Show in March, and also a gathering of paintings from 1969 to 2009 at the gallery's Fifth Avenue space. It was during that show that I met with Jaffe at the gallery for the following interview. I've known Shirley since I was a teenager, and written frequently about her work, but this was the first time we had ever sat down to do an interview. I was a bit concerned about the (for us) unaccustomed formality of an interview, and also about Shirley's well-known propensity to disagree with anything that anyone says about her work. She did, as expected, reject some of my observations but, thankfully, not all of them. I started off by asking her about some Parisian art world history (Shirley has lived in Paris since 1949), but what I really wanted was to ask her about her paintings, how she arrives at her unique brand of complexity, how her work has been evolving for the past 60-odd years, and how it continues to evolve.