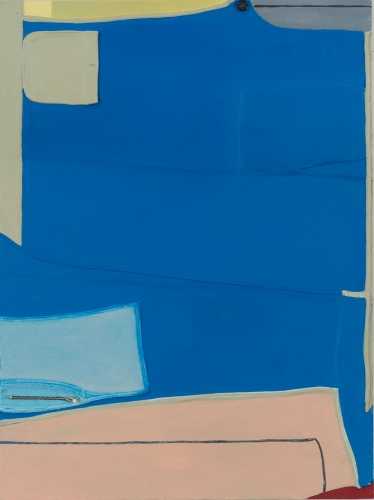 Medrie MacPhee’s exhibition, Scavenge, at Tibor de Nagy Gallery (June 15 to July 28, 2017) is not only her debut with that gallery but the latter’s inaugural exhibition in their new Lower East Side location, which they are sharing with Betty Cuningham. It seems, therefore, an auspicious moment to catch up with the artist and discuss what is a really interesting new direction in her work.

In an artist statement from a few years ago, MacPhee wrote that “My work has always been about survival both personal and as part of a species.” Not surprisingly, those collapsing cityscapes were made five years after the attacks of September 11, 2001, a length of time it seems that a lot of artists have taken to absorb that day into their psyche and their work. Since then her paintings have become more and more abstract, but held fast to her interest in both architecture and the body, in a really ingenious and personal way, I might add, by using pieces of fabric to create compositional form.

LESLIE WAYNE: Medrie, we’ve known each other for a very long time. I’m always fascinated by how the trajectory of one’s development keeps circling back on the same fundamental themes, in spite of how different the work may appear over the course of time. I recall so clearly falling in love with your paintings in the mid 80s, of large and surreal architectural landscapes. Since then, I’ve seen those water towers, industrial silos and stovepipes morph into highly chromed body parts floating in space, and later back into architecture in scenes of urban landscape subject to the forces of nature – and culture – at their most apocalyptic.

The story goes that you have a secret other life as a fantasy clothing designer. Is this right?

Medrie MacPhee: Yes indeed! Back in 2011 at a Christmas party instead of doing the usual re-gift at a Secret Santa event, I made a hat sculpture. That is, a collaged hat made out of a number of hats and notions. The impulse to collage has always been there no matter what body of work I was engaged in. For me collage is deeply rooted. Not within the classic intentions of collage. But collage/collaging as representing an idea of how one’s life is cobbled together. Barely holding often, but a tenuous balance where the parts and the whole are critical. The bringing together of disparate parts, the things that shouldn’t go together but must, the fragments etc. was more of an existential process rather than purely visual. That was the genesis. Or maybe it was my English mother who grew up in London at a time when one apprenticed and she wanted to be a hat maker! In any case my concoctions became a big hit with artist friends and hats lead to tops, vests, one-piece outfits and the idea of a clothing line called “Relax” with comfort being primary. “Comfort clothing for a fraught time.”

LW: Well it’s fascinating, don’t you think, that here you’ve brought together the two things that have dominated your work for years – body parts and architecture, by ripping apart clothing and using the pieces – the sleeve, or the pant leg, to piece together architectural form. It’s brilliant. But I know you and I would venture to guess that you never set out to formally or conceptually plan this approach in advance. So tell me, how did you get here? And were you aware of this psychological process at work?

MM: As you say, in the beginning there was no idea that the clothing/sculpture would be anything other than what it was.

Artists have often wondered why I didn’t make sculpture because my focus so engaged with architecture and forms in space. But I was resolutely a painter and – like many of my generation – interested in the edge between abstraction and representation. It was the measuring of a painting space between a full-on Renaissance perspective – painting as window – and everything in between that obsessed me.

Also, the older I’ve gotten, the more – as a woman of my time – identity politics and feminism have shaped me. Every woman struggles with how to expand the language of painting and yet must inevitably deal with the burden of a mostly male history.

My intention – in working with clothing – wasn’t overtly feminist, yet that said, it definitely felt transgressive. Fashion, style, sewing, clothing as identity have always been oppressive to me. My preferred style is “building management!”

LW: Yes I know! This is one of the funnier aspects of our friendship – my obsession with fashion and your complete disregard for it. But we could segue very easily into a discussion about fashion and feminism as a socio-political construct, and then we’d be getting a little off the point. But tell me how the pieces of dismembered clothing made their way – from a “fashion line” – into your painting. Was it purely formal, was it process driven, or were you always thinking about the idea of clothing from the get-go as a metaphor for something else?

MM: It was not consciously any of those things. That said, I was on the move between 2009-14. At that time I was making intensely colorful and active paintings that had all of the architectural references upended and floating/exploding in space. Could have been the outcome of a disaster or a reordering of everything. I was on the lookout – but for what I didn’t know. Then I made a conscious decision to take the color out and basically mimic the minimal color in the works on paper focusing instead on structure and then surface. Somewhere in the middle of that process I had a sudden and powerful urge to put in a real object of clothing. It went in but like many times before when I have been ahead of myself it didn’t go anywhere for another year or so. At a certain moment I was convinced that the addition of the clothing provided that thing I was looking for. Even though (especially now) the paintings appear abstract, I still think of them as representations. For me, the clothing brings the paintings back into a context that tangibly refers to the world and to people. Additionally, as a way forward and a way of thinking about process differently, I settled on an idea of the architecture of language. Using all of the inherent metaphors of language to visually suggest things like what is real and what is imaginary. What is the subplot? Is there transparency or opaqueness? Do these colors suggest something urgent/edgy or is the attitude more of stillness?

LW: So as I understand it, the materials and the process presented themselves as metaphors for the architecture of language and that as you started seeing how the pieces of fabric could work, your mind opened up to the formal possibilities and the full measure of painting’s conceptual potential – beyond the normal confines of what we think of as paintings. Would that be accurate?

MM:Well perhaps. I don’t think of decisions in painting as being so clearly linear. One thing is certain though, adding clothing and other collaged items (like the large acrylic transfers) took me out of my normal game into something entirely different. Even my idea about when a painting is finished became something new.

In a show we saw together years ago – it was the Brazilian artist Beatriz Milhazes – you explained the process of acrylic transfer – painting on plastic and peeling the painted skin off when dry. This was just “shop talk” between us at the time. Much later it occurred to me to bring this transfer process into my works on paper. The transfers initially presented themselves to me as enigmatic gaps/voids that within the context of architecture as language are inchoate.

In recent work they have taken on a dimensional aspect – more like characters but disruptive like the clothing. The heavy flat acrylic next to the transparency of the oil is a subtle discontinuity in the surface of the painting.

For me meaning and matter are inextricably bound up together. I don’t know what comes first. That said, now that my “palette” has stretched to include everything a seamstress/designer would use, it has radically changed my process.

LW: So the pieces of clothing are functioning in a similar way as a collage material, to the peeled up pieces of acrylic paint you were making earlier. Except that clothing is a very different kettle of fish. The references are far more complex and far-reaching than paint. How do you see those references playing out in your work, particularly given that you are generally – can I say hostile toward – or perhaps just disinterested in fashion as a signifier? After all, even clothing for comfort makes a statement.

MM: Of course. Once sweatsuits and jeans come into play issues of class do as well. This was not my original intention back in 2016 but inescapable as a theme given everything going on politically.

Comfort clothing is something you wear when the usual fashion signifiers don’t apply – which isn’t to say aesthetics aren’t involved. It is more personal and certainly more rebellious.

For the most part I am disinterested in women’s clothing and uncomfortable with the fraught nature of being on “display.” Signifiers inherent in women’s fashion – sexualizing oneself – are, at best, not interesting to me.

That said, in the past I probably wouldn’t have made the effort to see the Comme des Garcons show at the Met. The imagination, the humor, the startling combinations are truly inspiring. This definitely is not comfort clothing yet blurring boundaries between male/female/other appeals to me.

LW: Blurring gender boundaries and blurring the boundaries that normally dictate how we define painting and sculpture is an interesting conflation. Do you want viewers to see that the fabric pieces are clothing, and is it important to you that the clothing be identified as “comfort” wear?

MM: If the paintings were only seen online you might miss their dimensionality but it would be difficult to look at them in this show and not know clothes are involved. For example, in “Out of Pocket” – the largest painting in the show – there is an unpainted strip of blue jean with two pockets. Once identified, the seams and notions in the other paintings become obvious. Ideas of “comfort wear” started with the clothing but the idea that this extends into the paintings doesn’t concern me.

A couple of years ago I had an opportunity to be in Russia and found myself really engaged by their equivalent of the German Bauhaus, Vkhutemas (“Higher Arts and Technical School”). Like the Bauhaus, the school combined the art faculty teaching graphics, sculpture and architecture while the industrial faculty taught printing, textiles, ceramics, woodworking, and metalworking. Nowadays you have to be careful about admitting to Russian influences but I confess that these artists, including Malevich, Lissitzky, Popova, Rodchenko, Goncharova, Larionov and Stepanova, had a huge impact on meat that moment. I had been looking for something that was outside the strict confines of painting–not in any way a new idea but something that personally made sense to me. Indeed, the confines of a strictly painted language have been breeched in much more dramatic ways than by introducing clothing. That said, something organic and dramatic happened and I am just at the beginning.