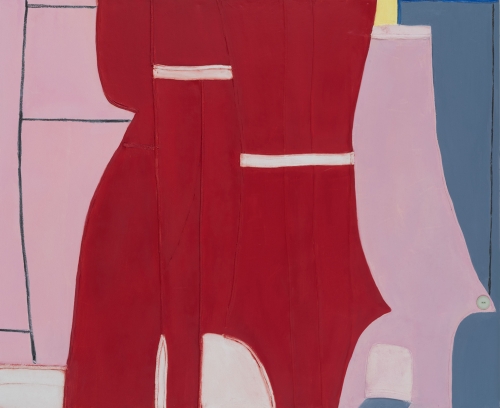 Because they are tactile as well as visual (usually made of woven fabric sheathed on a relatively stable support) and semiotically dense, clothes have a lot in common with paintings. In her current solo show, Scavenge, at Tibor de Nagy Gallery’s new downtown location, Medrie MacPhee narrows the asymptotic gap between the two to nearly nothing.

The raw material for her newest paintings is deconstructed apparel, yet this is no critique of the fashion industry — there isn’t a logo or label in sight. Instead, the artist works with the shapes and contours of disassembled garments, reverting to their origins in two dimensions and, along the way, giving “pattern painting” an entirely new meaning.

Despite MacPhee’s extensive exhibition record, especially in her native Canada, Scavenge is just her third New York solo in the last 20 years. Known for the architecturally derived paintings she has shown in at such painting-centric, mid-career-supporting venues as Michael Steinberg Fine Art (2006) and Von Lintel Gallery (2010), MacPhee now ventures in a different direction. The results are completely convincing, succeeding in part because of (rather than despite) their hauntingly familiar art-historical reverberations.

As my gallery-going companion said to me, seeing this show was like unexpectedly bumping into some old friends… even though we couldn’t quite remember where we’d first met. “A Dream of Peace” (60 by 78 inches, oil and mixed media on canvas; all paintings 2017 unless noted) typifies the collage-like method and appearance of the new work, in which broad areas of a single hue, outlined in (mostly) white piping are punctuated here and there by patch pockets, wide belt loops, big buttons, and puffy seams — indicators of sweat paints, pajamas and the like. These are pieced together in a way that synthesizes formal improvisation with the industrial imperatives of loungewear production. Featuring lemon yellow, two blues, warm earth pigments, and a pewter gray, the palette is designed for comfort.

The idea that a painting exists to clothe its structural support has yielded some laughs. In the mid-1980s, Dieter Roth used buckets of white glue to stick his old jackets, trousers and even pairs of shoes to sheets of plywood for his “Clothing Pictures.” A decade later, James Hyde made a line of “baggy” paintings, flouting the tightly stretched, Jordache-like norm.

MacPhee’s work probably has not much to do with Dada — either historical or Neo — but on the compositional level, “A Dream of Peace” reminds me of the great Man Ray painting, “The Rope Dancer Accompanies Herself With Her Shadows” (1916, Museum of Modern Art). While there is no little figure in MacPhee’s painting as there is in Man Ray’s, there are strongly figural echoes reverberating among jostling monochrome shapes and the twitching, snaking lines that visually bind them. Recurring curves build to a funny totemic cohesion in “In the Red” (45 by 55 inches), which also plays spindly brushstrokes and wan colors against a bold, central crimson mass in a way that recalls Amy Sillman’s pianoforte pictorial dynamics.

Much of MacPhee’s scavenging is more integrated, as in “Are We Green About This?” (45 by 55 inches). A hint of perspectival space emerges from the shallow chevron of denim (the “yock,” in trouser-makers’ parlance) at the painting’s top edge, opening up the space à la Richard Diebenkorn’s “Ocean Park” series. Notwithstanding its incipient landscape suggestion, the painting channels both John Chamberlain’s crushed and reconstituted automobile parts and Conrad Marca-Relli’s austere formalist patchwork — quite a feat.

In her delightful essay, “Why Abstract Painting Still Matters,” Laurie Fendrich asserts that “abstract painters ought to celebrate loudly, rather than apologize for, the convention-bound nature of their artwork.” Fendrich goes on to say that “the conventions are established, just as in baseball, and to derive pleasure from abstraction requires accepting its basic rules rather than continuously deconstructing them.” One of those conventions is the rectangular shape of the supporting stretchers. (No, shaped canvases aren’t rare, but they areunconventional.) As if to prove Fendrich’s point, MacPhee wittily fits her human-body-derived lexicon of shapes to unyielding, rectangular stretchers.

On the painting-into-clothing spectrum, MacPhee occupies a very different position from (for example) the wearable paintings — “parangolés” — of Hélio Oiticica. Oiticica’s project was more conspicuously “socially engaged” than MacPhee’s is. But (allowing the exhibition’s press release to shed light) MacPhee’s use of cheap, discount duds reveals her underlying concern with the economically precarious existence led by those who regularly clothe themselves from the 99-cent store. And anyway, social engagement is where you find it; arguably, for his late-1950s ink drawings of folded shirts fresh from the laundry, Willem De Kooning essentially collaborated with the worker who did his washing.

As in those drawings, which are indexical in scale to the human torso (by way of de Kooning’s shirt size), the general scale of the Scavenge paintings is guided by their constituent body-part-sized elements. Arms, inseams, waists, necks, etc., come in a relatively limited range of lengths, and the particular polyrhythmic pulse that animates these paintings needs just so much lateral movement, and no more. (Or less: “Left Unsaid,” at 40 by 30 inches, doesn’t really have enough elbow room to find a groove.)

Of the euphemisms we might use to describe an artwork’s shortcomings, among the most blandly pernicious is “transitional.” Its approximate meaning is “there’s a lot of work to do before this is gonna even begin to be convincing,” and it implies tentative ideas, inchoate means and/or partially digested source material. Quite boldly, MacPhee includes a transitional painting that is the show’s standout, and its largest by far: “Out of Pocket” (2016, 90 by 78 inches) predates the other paintings in the exhibition and appears to bridge the artist’s decades-long attention to architectural instability and recessive space via the flat, textural collaged elements that have taken over her very newest work.

Against a pale, blue-green ground, a blue and white mass of what might be hemlines, cuffs and lapels (cousin to Jim Dine’s bathrobe?) occupies the middle ground while a pool of brownish-red, both ominous and abject, looms on the left, opposite a loose latticework, like a plan of ancient streets, on the right. At center stage is a swatch of dark blue denim with conjoined-twin pockets forming an hourglass shape. The painting is completely absorbing because the intensity of the artist’s focus is so clear. An extremely accomplished painter, MacPhee makes adjustments as she goes along — to her paintings; to her understanding of space; to the objects of her attention. Her facility and evident visual literacy shouldn’t be mistaken for pastiche. These paintings are cohesive, fully realized, and deeply personal.