Tibor de Nagy is pleased to present Words Fail Me a one-person exhibition by Medrie MacPhee that opens on January 30 and runs until March 6. A fully illustrated catalogue will accompany the exhibition with a conversation between MacPhee and the artist Amy Sillman and an essay by the artist Nicole Eisenman.

This body of work represents a continuation of the significant shift for MacPhee who was known for her use of architecture and architectural forms to create narratives around the ideas of a dystopian future/past.

In recent years MacPhee began a fake fashion line (RELAX) for artist friends out of cheap discount clothing. Both “high” and “low” gear of mixed gender were cut up and reassembled into outfits with zippers, buttons, notions, other fabrics, and decorated hoodies. A kind of wearable sculpture where all of the things that might be considered in a painting such as opacity and transparency, shape and line, color and texture were considered. It was this act that eventually translated into the paintings.

Gradually what had been a “fashion” sideline - within a “gift economy” became translated into her paintings. The process begins in 99 cent store bins and bargain basements. In order to realize the potential of what has become a visual “matrix” or scaffolding - the loose grid of low-rise clothing on canvas suggesting shapes, moves, and colors that are then whitewashed over— she begins to paint, to improvise, to erase, to add until the painting fulfills the promise of the original set of conditions. It’s finally out of that matrix that the painting gradually arrives.

Color gives shape to forms recognizably human in origin where to borrow from Nadia Hebson’s essay in Material Matters (Art and Theory Publishing, Stockholm) “the recondite relationship between clothing and agency can be atomized and gender becomes fluid.” There is no tale to tell but meaning and matter are inextricably bound together in ways that conjure up all that can’t be said.

Medrie MacPhee was born in Canada and moved to New York in 1976. MacPhee’s numerous awards include American Academy of Arts and Letters Purchase Prizes (2015 & 2020), Pollock Krasner Award (2019), Anonymous Was a Woman award (2016), a Guggenheim Fellowship in Fine Arts (2009), New York Foundation For The Arts (1998), and a Canada Council Established Artist Grant (2004). Her work is in various public collections including the Metropolitan Museum, The National Gallery of Canada, the Palmer Museum of Art at Penn State, The Art Gallery of Ontario, and the Musée d’art contemporain de Montréal. MacPhee is the Sherry Burt Hennessey artist-in-residence at Bard College. 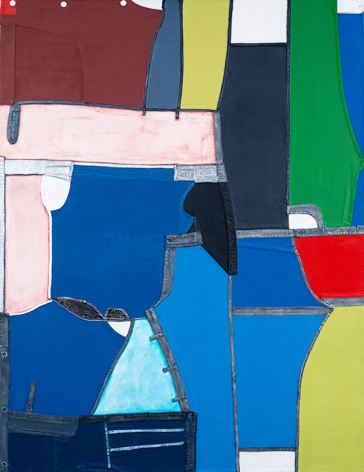 Medrie MacPhee by Johanna Fateman in the New Yorker

In 2012, when this Canadian-born painter started a conceptual fashion line called RELAX—featuring bespoke garments stitched together from sweatsuits and similarly comfortable, affordable castoffs—she also discovered an innovative, collagelike structure for her abstract canvases. (MacPhee, who moved to New York in 1976, had previously been depicting surreally empty architectural spaces.) In the four new paintings in her current show, at the Tibor de Nagy gallery, blocky flatness and rugged surfaces rule. The big compositions’ irregular shapes are plotted out by the seams of deconstructed garments, like parcels of land on a map. In “Take Me to the River,” a commanding work in bright navy blue, an overlay of white lines suggests fragmented circuitry; “Favela” is a handsome crowd of mustard, crimson, burgundy, and blue trapezoids. Although MacPhee sometimes plays with the gender associations of the fabrics she chooses, such concerns feel secondary to her invigorating and magnetic formalism. 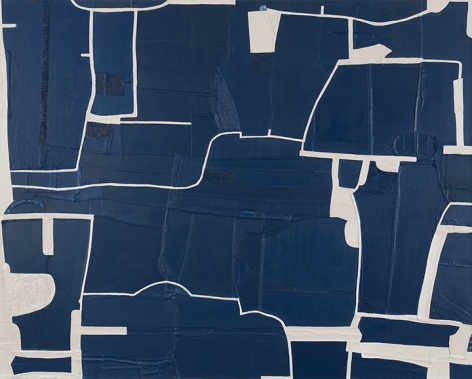 Medrie MacPhee by Roberta Smith in the New York Times

About five years ago, Medrie MacPhee began to rethink her paintings. She jettisoned her swirling, unstable compositions, whose tangled forms, derived from architecture, often hung, Surrealist style, in empty space. She found, as many painters do as they mature, that she could do more with less. She started collaging parts of cutup garments to her canvases, fitting them together like puzzles, letting their welted seams define taut shapes that now extend edge to edge. She replaced a familiar illusionism with an adamant, witty physicality. In so doing, she dramatically improved her work and took ownership of it.

Four new canvases form “Words Fail Me,” MacPhee’s impressive second solo show with Tibor de Nagy. They are powerfully flat, more literal than abstract. Their compartments of color are alternately solid, slightly brushy or wiped down to a pale transparency. The familiar details function formally while providing little shocks of recognition: not only seams, but also belt loops, waistbands and the occasional zipper or pocket. In “Favela,” belt-looped waistbands painted white divide blocks of red and brown; they are placed vertically, like ladders, which evoke the title and MacPhee’s affection for architecture. In the majestic “Take Me to the River,” the entire surface is a deep oceanic blue and the dividing seams are picked out in white. It suggests a sparsely lighted terrain seen at night, from above. But plenty of seams are left lurking in the blue, creating a ghostly infrastructure whose depths have a horizontal pull — perhaps out to sea.