The Tibor de Nagy Gallery is pleased to present an exhibition of Larry Rivers’s mixed media constructions from the mid-1960s into the early-1970s. Many of the works have not been exhibited in over forty years. It marks the third exhibition since the gallery started to represent the Rivers Estate in 2008.

The artist’s career was marked by unexpected turns, seemingly nonlinear developments in his work as he followed his enthusiasms, often to the befuddlement of his audience and critics. It is perhaps a surprising fact that after 1963, Rivers didn’t have a show in New York for another seven years, until 1970. It is particularly surprising because this period came on the heels of Rivers’s breakout success of the late 1950s.

Starting in 1966, the year of the earliest work in the show, Rivers abandoned much that established his reputation, including his painterly touch. He started working with new materials including Mylar, plastics, and plexi-glass, and created three-dimensional mixed media constructions and collages.

The dramatic change in Rivers’s work closely corresponds to the death of his closest friend poet Frank O’Hara. It has been suggested that with O’Hara’s death, Rivers had lost not just his closest friend, but also the person who for years provided guidance, encouragement, and a critical eye. His new work explored a broad range of subjects from the personal to the political. Many of the works in the show demonstrate Rivers’s consistent exploration and display of his public and private life.

Bad Witch (1970) (pictured above) and Small Bad Witch (1972), respectively the largest mixed media work in the exhibition and its smaller study, depict a large hypodermic needle with a face, surrounded by heroin paraphernalia including a spoon. It is covered in shimmering mylar and is made from polycast and metal. The subject is based on a character from a collaboration he made with Terry Southern.

Rivers was born in the Bronx as Yitzhok Loiza Grossberg. He changed his name to Larry Rivers in 1940 as he worked as a jazz musician while studying music theory and composition at the Juilliard School of Music. He began painting in 1945, studying with Hans Hofmann, and at New York University. The artist’s work has been exhibited and collected widely throughout the United States. His paintings are included in major museum collections, including the Museum of Modern Art, the Metropolitan Museum of Art, the Whitney Museum of American Art, the de Young Museum, and the Solomon R. Guggenheim Museum. Within the last two years, seminal works of his were included in a major survey on Abstract Expressionism at the Museum of Modern Art, the Smithsonian Museum, and the Brooklyn Museum. 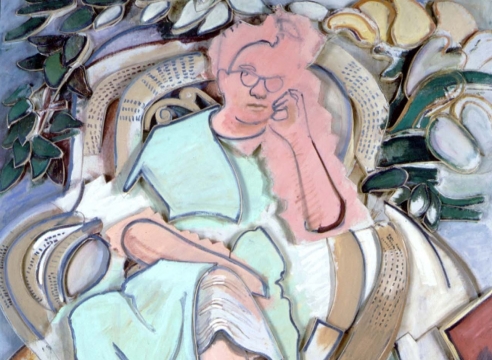