Stettner (1922-2016) was thirteen when the gift of a box camera from his parents planted the seeds of his long career. Soon after, an article by Paul Outerbridge Jr. in a camera magazine helped the young artist appreciate the great potential of photogaphy for interpreting the world around us.

Throughout his teenage years, he made regular Saturday visits to the Metropolitan Museum of Art where he persistently worked his way through the complete history of American photography by studying original prints and back issues of Camera Work.  In the course of this exploration he was particularly moved by the works of Alfred Steiglitz, Clarence H. White and Paul Strand.  Visits to Steiglitz’s gallery American Place also informed his early development.  Later in his teens, Stettner contacted Paul Strand to ask him to critique his work and thus began a relationship that was to resume and deepen in 1951 in Paris.

In his late teens Stettner took his first and only classes in photography, given by the Photo League, a cooperative of photographers devoted to newly developing socially conscious photography. Through the Photo League’s exhibits, Stettner was further exposed to the work of Weegee, Edward Weston, and Lewis Hine.

The experience of participating in World War II was to profoundly permeate Stettner’s life-long development as a photographer: “If my photographs have always been embedded in daily life, with the emphasis on what is called the ‘common man’, it is because my early formative years were deeply politicized by world events.  I grew up with the rise of totalitarianism and what was part of a hurried transformation of the average citizen into a soldier […].”

“It is hard to assess what taking battle pictures has meant to me as a photographer.  I do know that I lived and fought together with my fellow countrymen – fishermen, industrial workers, storekeepers – whom I had only brushed up against in Times Square […] farmer boys from Kentucky hills […]. How they successfully fought against fascism has given me a faith in human beings that has never left me.”

After his discharge from the army in December of 1945, Stettner returned to New York and resumed his association with the Photo League. Sid Grossman, a revered teacher  and photographer whose deep faith in the creative potential of people and in their ability to solve critical problems, befriended Stettner and was to become a decisive influence.   He went on to appoint Stettner, twenty-two years old,  as the youngest teacher at the League. It was at this time Stettner first met Weegee, a prelude to their long-term friendship.

Of his experience in the Photo League, Stettner was to later write : “ The League taught me that no matter how original and talented the photographer’s vision might be, the ultimate success of the photograph was mutually dependent on the photographer and world of reality around him […] not to ignore, but on the contrary, to concentrate his talents on everyday working  people and what was immediately around him in terms of living and environment.”

In 1947 Stettner left on a three week trip to Paris which extended into five years.  In Paris Stettner received a commission from the Photo League to gather prints from significant French photographers (Brassai, Izis, Boubat, Doisneau, Ronis, Masclet, etc.) and organized the first exhibition of post-war French photography in the United States at the Photo League’s gallery (1948).   The experience of selecting these photographs was the beginning of several vital friendships with fellow photographers, foremost Brassai, whom Stettner considered as his master and with whom he maintained a close friendship for decades.   His lifelong friendship with Edouard Boubat  also begun at this time.

Stettner became an active and valued member of the post-war photography scene in Paris, where he would be visited by the likes of Eugene Smith and Robert Frank on their trips to France to share reflections on his work.  Paul Strand’s return to Paris permitted the two to establish a routine of weekly lunches. In 1950 Stettner was a major prize-winner in Life Magazine’s Young Photographers contest.

Stetttner returned to New York in the early 1950s and worked a freelance photographer for Life, Time, Fortune, Paris-Match, etc. as well as advertising firms in the US and Europe. This resulted in his traveling frequently across the Atlantic. Early on he also photographed for the Marshall Plan but was to lose his job for his association with the Photo League and for refusing to reveal the political views of his fellow Photo League members to the FBI during the height of McCarthyism.  In the later fifties, Stettner continued to pursue his personal creative photography begun in Paris. He completed his iconic group of series, including Penn Station, Nancy, the Beat Generation, and Pepe and Tony, Spanish Fishermen.

It was also during this time Stettner—possessing a sense of social  and economic justice, a keen eye, and a vast self-taught knowledge of both the technique and history of photography—first began to write about the subject. This was a pursuit that he continued periodically over the next forty years beginning with 35mm Photography, History of the Nude in American Photography  and later his noteworthy 1970s column, “Speaking Out,” published in Camera 35 . Stettner was one of the rare photographers of the twentieth century who wrote about photography and went on to critique its historical development during his times from the perspective of a working photographer.

At  the end of 1960s Stettner began teaching and lecturing at Cooper Union, Brooklyn College, and then at Long Island University. Having been awarded a National Endowment for the Arts grant, Stettner photographed his Worker Series. In 1975 he was awarded First Prize in the Pravda World Contest for Photography and spent six weeks photographing the Soviet Union.  (In passing, it is fair to note that Stettner’s left-leaning politics help to account for some of the obstacles he encountered in his professional career in the United States during the Cold War.)

By the early 1980s Stettner had ceased teaching and writing his “Speaking Out” column, devoting the next several decades to furthering the development and expression of his own creative vision.

Stettner returned to France permanently in 1990 where his photographs garnered ever-larger audiences throughout Europe. He also began to paint, draw and sculpt. He was awarded the Chevalier de l’ordre des Arts et des Lettres by the French government in 2001.   During these last years, Stettner began his Manhattan Pastoral color series during summer trips to New York  and a three year project using an 8x10 large format field camera when photographing the the countryside of the Alpilles region of Provence, continuing  as ever to personally print his photographs. Stettner died in Paris on October 13, 2016 a month after the closing of his widely acclaimed exhibition, Ici Ailleurs, at the Centre Pompidou.

Throughout his prolific career, Louis Stettner, a force of nature with a [Whitmanesque] passion for life and the inquiring mind of a Greek philosopher, was befriended by many of the most significant photographers of the Humanist school of photography of the 20th Century: Brassai, Strand, Weegee, Sid Grossman, Lou Faurer, Boubat, and Cartier-Bresson, among many others. The influence of his fellow photographers, whose critiques of his work Stettner always profoundly valued, was to reinforce a relentless pursuit  to grasp the significance of life and the reality around him.

“[…] it was a joyous route, such magnificent sights and human splendor along the way that difficulties magically effaced themselves. One regretted nothing and would have it no other way.” Louis Stettner,  Wisdom Cries Out in the Streets 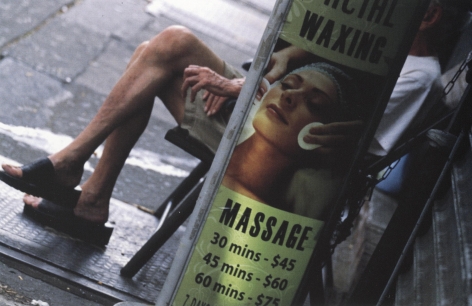